In response to the success of the first series of the Connecting Memories Podcast, a second series was produced and published in the Spring/Summer 2020.

​The speakers on the second series were:

Episode 3
​Prof Ann Rigney (University of Utrecht)
‘The Afterlife of Hope: how the killing of demonstrators is remembered'

Episode 4
Prof Patrizia Violi (University of Bologna)
‘What future for contested monuments?’
​
Episode 5
Dr Sarah Gensburger (CNRS)
‘From ordinary memory to extraordinary heritage: a study of the memorialisation of the 2015 attacks in Paris?’

The first series of the Connecting Memories Podcast was released in Spring 2020 in response to the coronavirus pandemic. It immediately garnered a large international listenership.

​The speakers on the first series were:

​Thanks to everyone who participated in the Connecting Memories 2020 Symposium with Postgraduate Masterclass, a one-day event exploring memory as a transdisciplinary research object and the multitude of ways of approaching it as such. The event was another great success!

As well as offering plentiful networking opportunities, the event was composed of sessions consisting of
short presentations, in which speakers present their research and methods,
as well as a keynote lecture by Professor Astrid Erll (Goethe-Universität, Frankfurt a. M.).
In addition, Prof Erll held a masterclass for postgraduate students.

Originally planned to take place on Monday, 29th June 2020 in 50 George Square, Edinburgh, the symposium was held online as a result of the coronavirus pandemic.

While symposium sessions were only be accessible for delegates,
the keynote lecture was livestreamed on YouTube and is available to watch below.
​The original call for papers for the symposium can also be found below.
​
They keynote lecture was given by
Prof Astrid Erll (Goethe-Universität, Frankfurt a. M.)
and was entitled
‘Corona and Collective Memory'.

This event was a collaboration between Connecting Memories and the
Centre for the Study of Modern and Contemporary History (CSMCH),
the University of Edinburgh's leading centre for research
into the history of the modern world.

Prof Winter's talk was followed by a comment by Paul Leworthy and
a Q&A discussion chaired by CSMCH director, Dr Emile Chabal.

We are grateful both to the University of Edinburgh's
Department of European Literatures and Cultures (DELC)
and to the CMSCH for their support with this event.

The event poster and Prof Winter's abstract can be found below and a full audio recording of Prof Winter's talk can be heard on the CSMCH's Audiomack page here. Thanks to Dr Emile Chabal for making and editing the recording.

Not for the first time, all of the tickets on Eventbrite were reserved ahead of the event. The full house made for a great atmosphere. ​Thanks to everyone who came along!
Prof Winter's abstract:

Language frames memory.  Words, images, photographs, films, sculptures, are all languages of memory.  Each of these languages has its rules and its own history.  Each frames memory, in that each enables us to construct, retrieve and express memory, and each limits what we can recall and what we can say about our recollections.

My claim is that silence is one such language of memory.  I will develop this argument in the context of remembering the upheavals of the war decade 1914-24.
​
Silence frames war remembrance for many reasons.  The most elementary is that the carnage caused by war touches on the sacred, and the sacred is one theatre of memory where silence is ubiquitous.   But there are other domains of silence, in particular that of family memory, in which what is not said in daily life performs the underlying insults and injuries survivors of war and revolution carry with them for the rest of their lives.

We showed the film ‘Sacred Ground’ by Tim Gruenewald and Ludwig Schmidtpeter.

The film was introduced by Dr György Tóth (University of Stirling).

This event also provided us with
an opportunity to wish farewell to Dr Bárbara Fernández,
the co-founder of the Connecting Memories research initiative,
as she left Edinburgh to take up a post as
Assistant Professor in Latin American Studies at the
University of Hong Kong.

We are grateful to the University of Edinburgh's School of Languages, Literatures and Cultures
​for their generous support with this event.

The event poster, including information about the film, can be found below.
​
Thanks to everyone who came along. The film screening marked another first
for the Connecting Memories research initiative
​and the event was another great success ! ​ 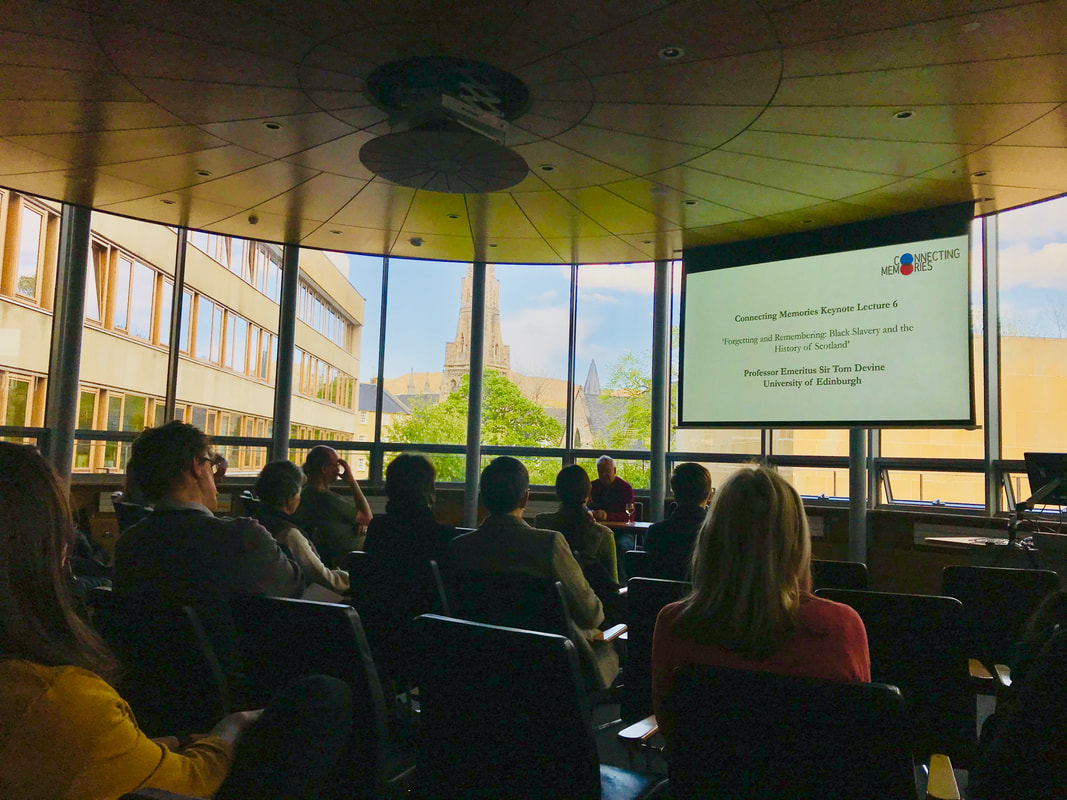 Dr Alicia Salomone  (University of Chile)
delivered a lecture entitled
‘Transgenerational memories in artworks by children and grandchildren of victims of Pinochet’s dictatorship.’

We are grateful to the University of Edinburgh's Department of European Literatures and Cultures (DELC) and Centre for Contemporary Latin American Studies (CCLAS) for their support with this event. 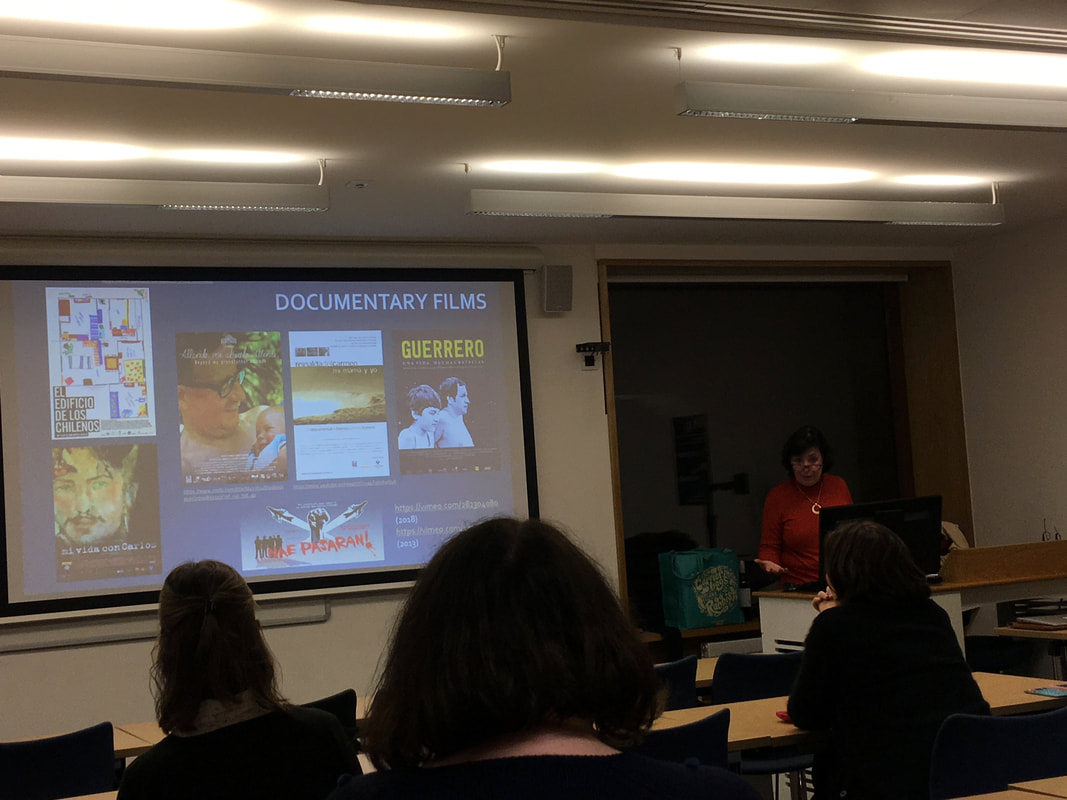 A summary of the event written for the IMLR blog can be viewed here. It is also reproduced below.

After an incredible response to our CfP,
the event proved to be a fascinating and productive
exploration of interdisciplinary perspectives relating to memory.

At the heart of the event were
two roundtable discussions, incorporating more than ten ‘micro-presentations’,
and a keynote lecture by Professor Andrew Hoskins.

There were also extensive opportunities for networking and discussion throughout the day. 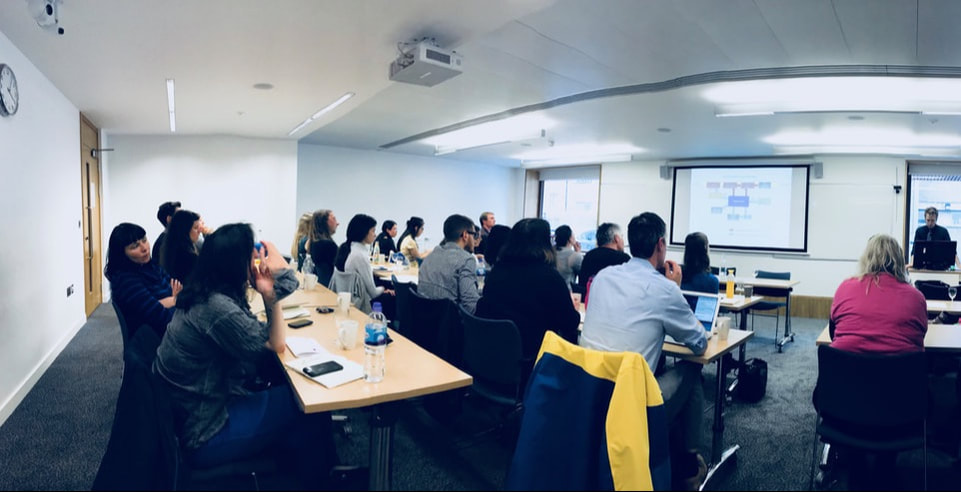 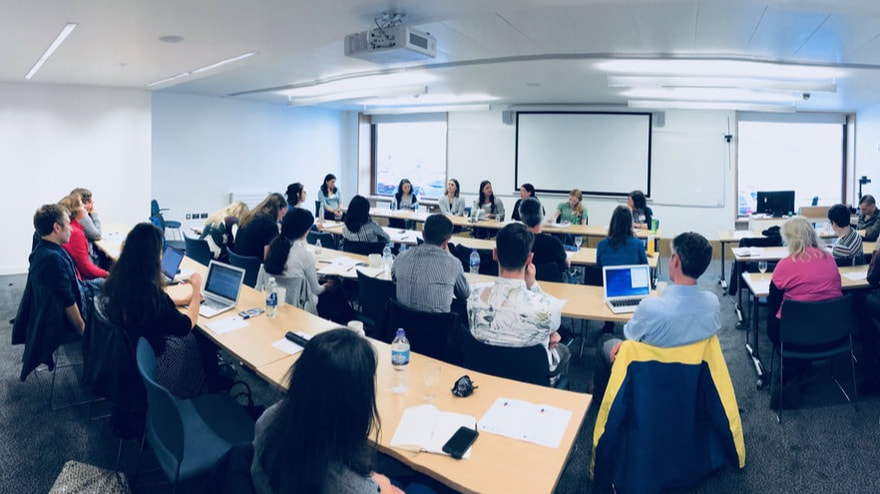 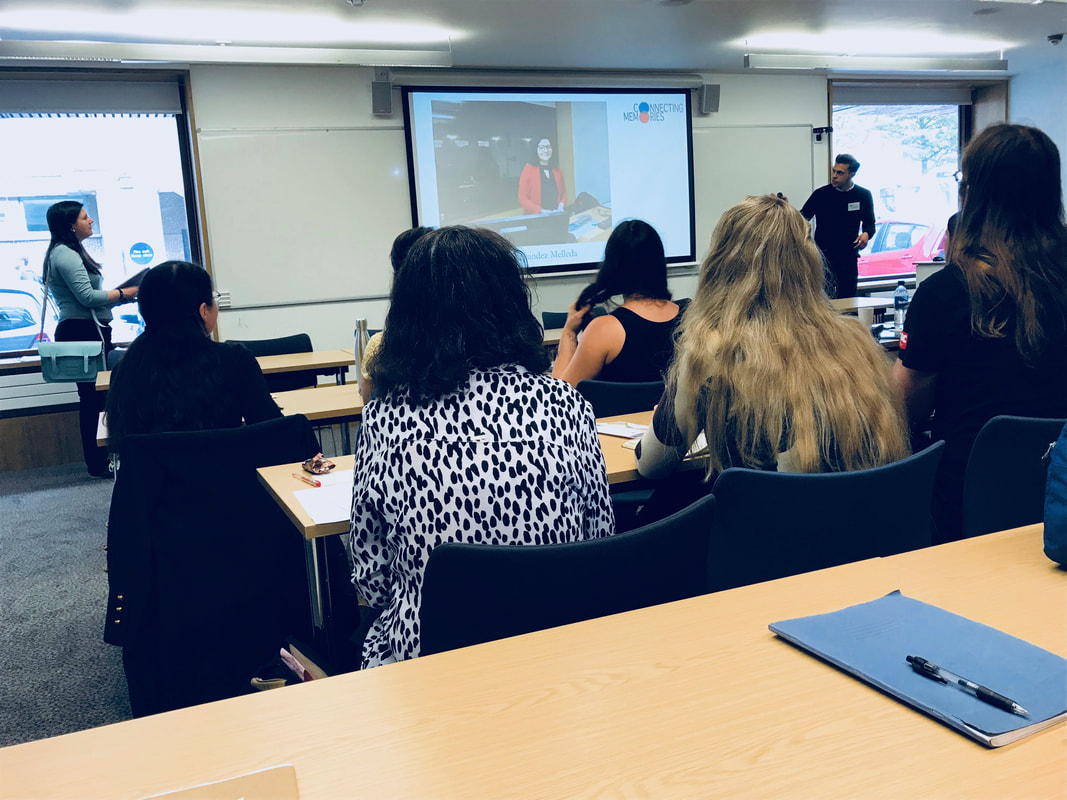 The Connecting Memories symposium took place on Friday 1stJune 2018 in the University of Edinburgh’s School of Languages, Literatures and Cultures. Funded by the IMLR, the symposium was part of the Connecting Memories Research Initiative’s ongoing efforts to develop links between scholars working on different aspects of memory and to establish a network of researchers working on memory in the UK, especially in Scotland and the North of England.

The main aim of the symposium was to bring scholars from various institutions and disciplines together in order to create a dialogue between them about their different perspectives on memory. To that end, the event was composed of two round table panels and a keynote lecture. In the round table sessions, each of the speakers gave a 5-minute micro-presentation on some insight or methodological point relating to their own research. After the presentations, the chair took questions from the audience and initiated discussions between panellists, seeking to draw out the connections and disconnects between the presentations and the perspectives on memory voiced in them.

Delegates included scholars working in the fields of English literature, Chinese studies, French and Francophone studies, German studies, Spanish and Latin American studies as well as anthropology, history, heritage, sociology and political science. While most participants hailed from the humanities and social sciences, we also had delegates from disciplines including neuroscience, psychology and computer science. Attendees hailed from more than 15 different institutions across the UK. The Scottish universities of Edinburgh, Glasgow, Strathclyde, Stirling and St Andrews as well as Edinburgh Napier University and the University of the Highlands and Islands were all represented. Universities in the North of England were represented by attendees from Newcastle and York St John. Other speakers travelled from the universities of Cambridge, Cardiff and Brighton. Speakers included postgraduate students, ECRs and established academics.

The symposium opened with a welcome speech by Paul Leworthy. In the round table sessions, we heard fascinating micro-presentations on a variety of subjects, all of which were admirably packed with information and insights despite the restrictive 5-minute time limit. Adeptly chaired by Dr Claire Boyle and Dr Simon Cooke (both University of Edinburgh) and propelled by incisive audience questions, the discussion sessions traced some of the connections and contradictions that obtain between different approaches to studying memory.

The role of spatial, social and cultural schemata was a key node around which contributions clustered, with interventions from scientists, social scientists and cultural critics each casting the others’ into sharper relief. The cultural framing of the past was considered in terms of narratives, nations and – often at the interface of the two – translations. Cautionary, critical and more optimistic positions were all defended as different forms of external memory resources were discussed. Positing memory as a present performance of the past, questions were asked on the one hand about the socio-political opportunities memory offers and on the other about the responsibilities it entails.

The day was rounded off by a captivating keynote lecture by Professor Andrew Hoskins (University of Glasgow) in which he drew on his research in digital memory studies to argue for a recalibration of the study of memory such that it affords adequate status to forgetting. The three main sessions were interspersed with opportunities for delegates to pursue conversations and enquiries sparked in the discussion sessions. Connections continued to be made in lively discussions during the drinks reception at Harry’s Bar after the symposium.

Participants praised the format of the symposium and the breadth of the research perspectives it brought together. Delegates described how the event encouraged unexpected conversations and provided plenty of time and space for those talks to take place. The exposure the event offered to aspects of memory that individuals hadn’t encountered in the course of their own research was equally popular.

This text was first published on the IMLR's Living Languages blog (here).

We are grateful to the Institute for Modern Languages Research (IMLR) for sponsoring the
Connecting Memories symposium.

Prof Richard Morris (The University of Edinburgh) delivered a lecture entitled
‘The making, keeping and losing of memory’. 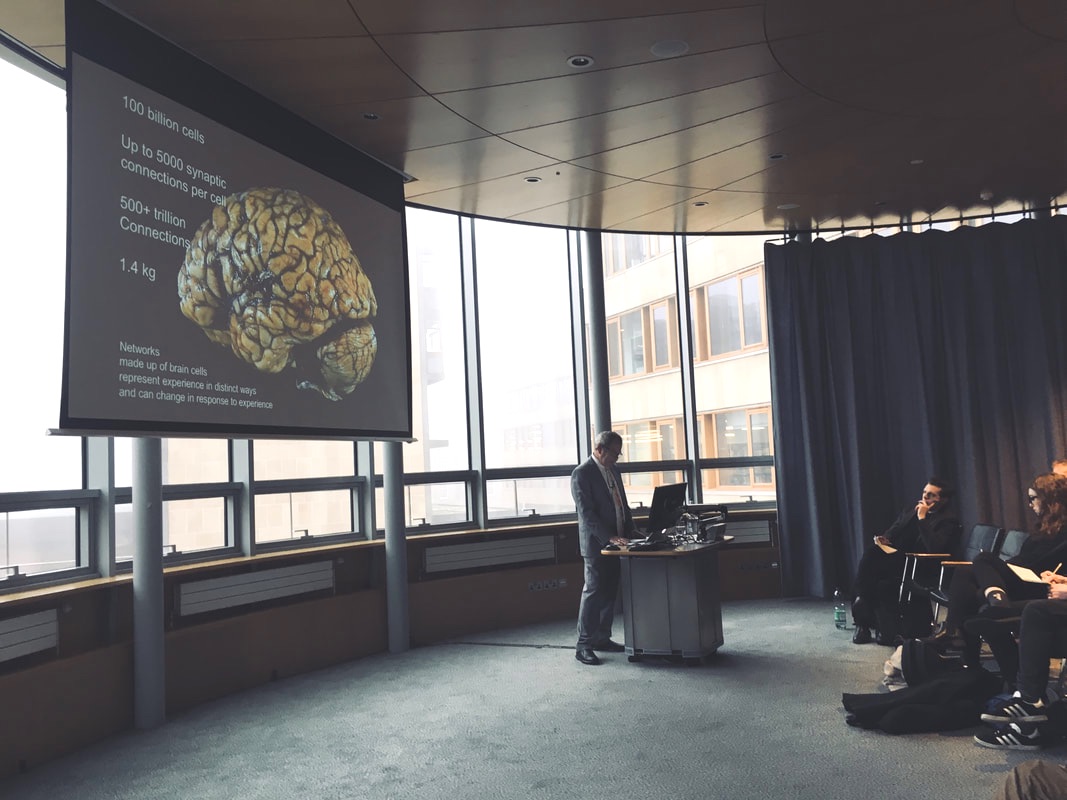 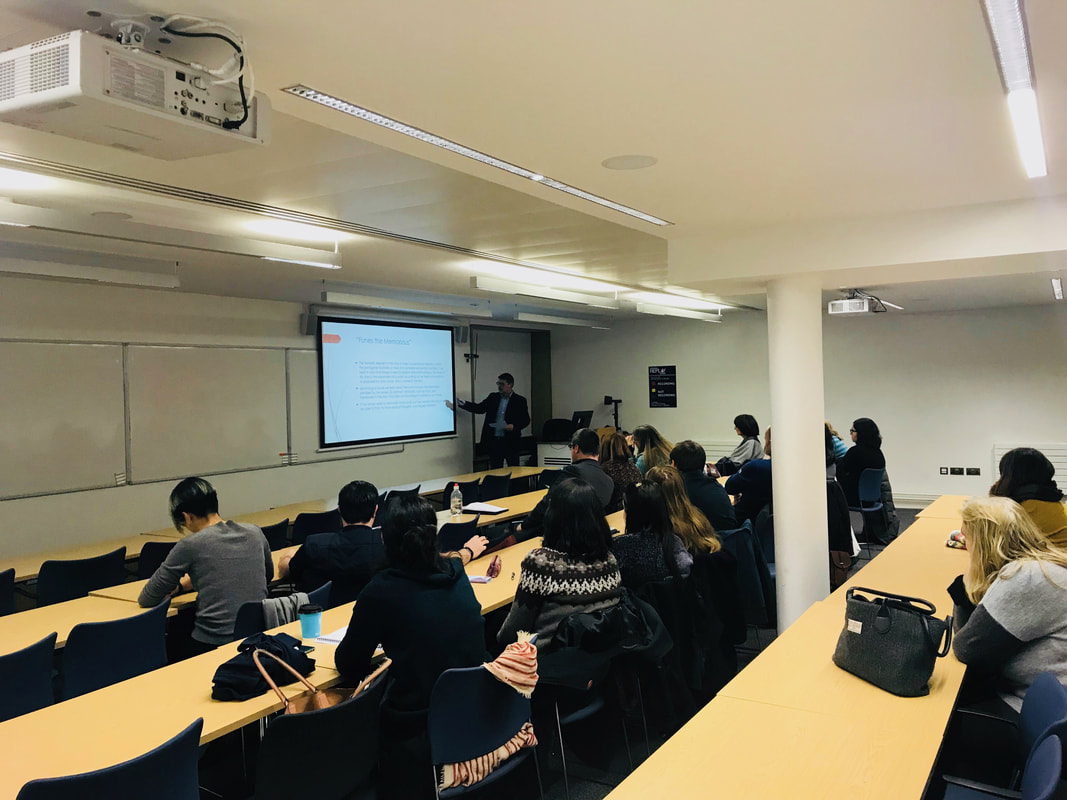 Thanks to all those who participated. It was a great success!

We enjoyed the lively group discussions and gathered a lot of ideas for round-table sessions in the new year.

Additionally, the event offered the first of many important opportunities for networking and trustbuilding.

Special thanks to those who travelled from Glasgow and Stirling.

Below is a selection of photos from the event. 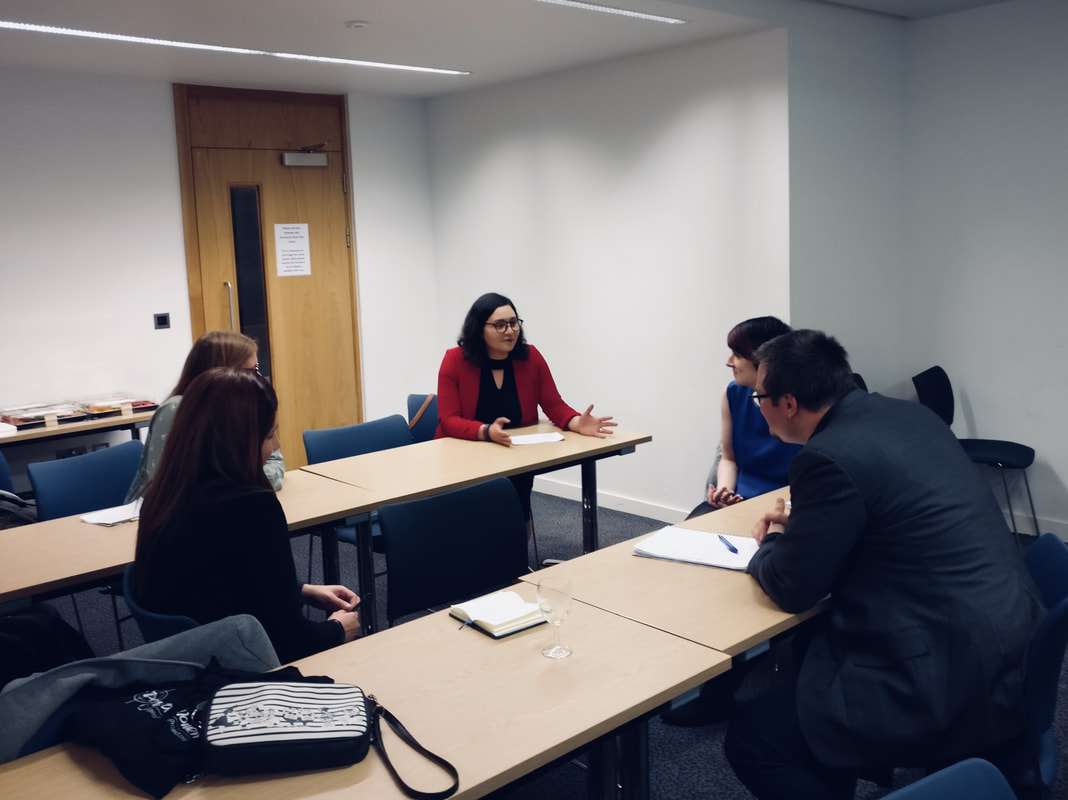